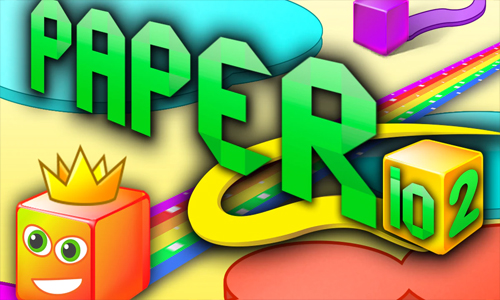 Up for a fun multiplayer game that involves you controlling a unit that lets you expand your territory on the map as much as possible to defeat opposing players? Then Paper.io 2 is the game for you!

Created by Voodoo, Paper.io 2 is an addictive game that challenges your critical thinking and dexterity as you compete with other players in encompassing as much territory within the play area as possible as well as trying to eliminate them.

Controlling your unit in the game is simple – you can either use the W, S, A, and D buttons on your keyboard or the mouse to move. You start the game within your designated colored circle, and as you move away from it, you will leave a trail. When you loop around and return to your colored circle, the area you’ve encompassed will be colored in and becomes your area. The further you venture out your colored territory and return, the bigger your region becomes – you can try to expand slowly, or go encircling large expanses of the map to claim it for your color.

However, you have to beware that other players are doing the same and can ruin your plans by bypassing some of your territories and claiming it for their own or even worse – they might try to kill you by running onto and cutting off your trail!

As you cover more ground, you will notice how much of the map is left uncovered. The more surface area you gain, the better your chances of winning is since you are relatively safe within your colored region. However, other players are also doing the same, so you have to be attentive and take note of where the other players are.

Whenever you see other players move, try to trace where they came from and try to cut off their trail. Doing so will eliminate them, but be careful because they can do the same to you when they see your trail. You can also try to encompass the opposing player’s territory if you can, but that is a risky play.

On the defensive side, it is best to avoid clashing with other players’ snakes head-on – this will result in both of you getting eliminated!

Compete against other players and gain as much of the map as you can, or you can play with your friends and enjoy trying to take them out with your snake! As you complete levels, you gain access to different skins. This will help you stand out from other players and makes you see any interlopers to your territory much easier.

The bigger your territory becomes, the more encounters you will have with other players since they will be pressed to stop you from expanding your color across the map. Do your best to cut off their trails while protecting your own to ensure you are the last player standing after the dust has settled!

October 3, 2020October 15, 20203 min read
Have you ever wanted to play a puzzle-solving game that tests your mental acumen and also feels refreshingly simple? Look no further than Flow Free.